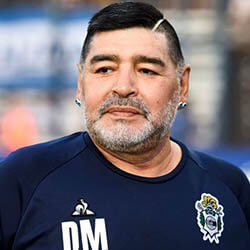 Former soccer star Diego Maradona is according to his doctor in a stable condition following surgery performed on him last week.

The Argentine soccer hero underwent surgery in order to correct a problem causing the accumulation of blood between the brain and a membrane (subdural hematoma). According to Maradona’s neurologist, Dr. Leopoldo Luque, the event was most likely caused by an accident involving a hard knock to the head. Maradona has however been unable to recall such an event.

Diego Diaz, the psychologist taking care of the former international sports star during his stay at the Olivos private clinic in northern Buenos Aires, on Tuesday commented on Maradona’s condition by saying that the former soccer star, not unlike everyone else suffering from a similar health issue, now needs his doctors, therapy, and the support of his family.

Maradona (60), said Diaz, though a national sporting hero, is subject to the very same advantages and limitations as everyone else. He now also needs what anyone in else in his position would – proper pharmacological assistance and management, sufficient food, and sufficient rest.

According to information provided by neurologist Leopoldo Luque during a radio interview on Wednesday (New Zealand-time), the sporting legend will following his discharge from the medical facility where he is currently in recovery be transferred to a house located close to the Buenos Aires homes of his two eldest daughters.

Luque during the same interview referred to Maradona as a “patient” who favours living life to the extreme and a man convinced of the need to keep working.