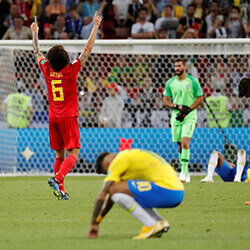 The World Cup continues to excite fans as it counts down to the semi-finals, with this year’s current competitors being Brazil and France. Brazil has its eyes set on winning the trophy again this year at Moscow, which would extend its current record to six World Cup victories.

Before they can have a go at the title, Brazil needs to take on Belgium, who has done exceedingly well so far, and boast a powerful team of their own. Kazan Arena will be the deciding venue for the two teams, which is expected to be overflowing with Brazil’s fans. Romelu Lukaku, Eden Hazard, and Kevin De Bruyne have been given the chance to show off their skills at an international level.

Vincent Kompany, veteran defender of Belgium told reporters that he believes Brazil is currently the strongest team at the World Cup this year, but he maintains that this won’t affect the chance of Belgium making it through. He added that none of the players in Belgium are going to sleep with the fear that they have already lost against Brazil. He went on to say that the key was to stay together as a group, and that if it’s made into a game of individuals, then they will most likely lose to Brazil.

Coach Tite of Brazil stated that his team were desperate to win the match without resorting to the assistance of penalties, and hopes to win the game through fair play.