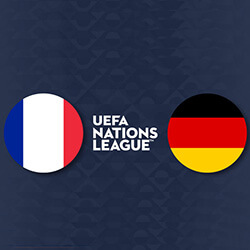 France has added to Germany’s current misery as they finished the game 2-1 in the UEFA Nations League match that saw the World Cup winners once again proving their mettle.

Die Mannschaft managed to earn the lead fair early on in the 14th minute through a penalty by Toni Kroos, which came after Presnel Kimpembe was penalised for a handball. Thilo Kehrer came close to doubling the score for Jaochim Low’s team in the 24th minute with a header following on from a corner, but Le Bleus’ stopped Hugo Lloris managed an efficient save.

Paul Pogba came the closest to equalising the score two minutes before the half-time bell thanks to a long strike that just missed his target, and the team went into the break with Germany leading 1-0.

Kylian Mbappe almost changed that seven minutes into the second stanza after going through with a goal with only Manuel Neuer in his way, but Germany’s shot-stopped kept his team ahead with a quick save.

Antoine Griezmann finally managed to earn the equalising goal for the French team in the 62nd minute thanks to a header from the penalty area that went straight into the far corner. Griezmann continued to shine as he gave Les Bleus the lead with ten minutes to spare from the penalty area after Blaise Maduidi was brought down in the box, and France took the lead of 2-1. France now leads Group 1 in League A with seven points from three matches.