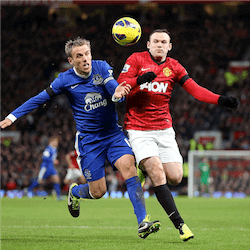 Premier League Leaders, Manchester City recorded their 16th straight win, sweeping aside Leicester City 2-0, while Manchester United welcomed back Paul Pogba with a 4-1 win over Newcastle United. Things didn’t go as well for Tottenham Hotspur who suffered a 2-0 defeat at the hands of Arsenal which means the League looks to be a contest between the two Manchester teams who are now separated by just eight points.

In the Man City match, it was Gabriel Jesus who tapped in the first goal off a brilliant strike from Kevin Du Bruyne. Leicester came close to equalising when Harry McGuire struck the post just after the break. A counter attack by De Bruyne put the game out of contention with a 20-yard thumper straight into the net. The only concern for Man City was an injury sustained by John Stones who may not be able to play for the rest of the season.

In Old Trafford, Manchester United’s Pogba and Ibrahimovic were back in action, much to the delight of United fans. The French player scored United’s third goal Against Newcastle and contributed a valuable assist. Coming from one goal down, United came back with a vengeance with Chris Smalling, Romelu Lukaku and Anthony Martial all getting in on the action. This was the fourth time this season that United hit four goals in a match.

Meanwhile in London, Arsenal pulled off a convincing 2-0 League win over Tottenham Hotspur at the Emirates Stadium. It was Mustafi who opened the scoring for Arsenal with a superb header in the 36th minute. The advantaged was then doubled 5 minutes later with a close-range strike by Sanchez. The win takes Arsenal to fifth on the log, just one point behind spurs.

At Anfield, Liverpool recorded their third consecutive Premier League win, defeating Southampton by 3-0. Mohamed Salah scored twice, in the 31st and 41st minute, making it 14 goals from 18 games. Philippe Coutinho, slotted in the third to put Liverpool just one point off a placing in the Champions League.

For their part, Chelsea had an equally good afternoon, sweeping aside West Bromwich Albion 4-0 who are now 11 games down without a single win. In the Crystal Palace vs Everton match, it was another goal fest as both sides showed cracks in their defence. In what turned out to be an entertaining match, the two sides picked up two goals apiece with the final score being 2-2.