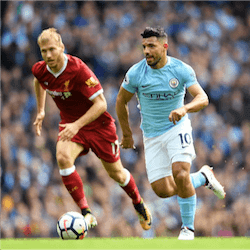 Manchester City has fallen at the hands of their old rivals, Liverpool. After enjoying an extended run of undefeated brilliance, City went down 4-3 at Anfield, a ground where they have achieved just a single win in the past 37 years. It all fell apart at the hour mark where Liverpool scored three quick goals to stun City in submission.

After almost an hour of play, the scores were locked at one all. Liverpool went on the attack again, giving Roberto Firmino the chance to chip over the goalkeeper’s head and regain the lead. Two minutes later, Sadio Mane blasted a rising shot into the top of the net. Mohamed Salah then put the nail in the coffin, capitalising on a particularly poor clearance from Ederson in the 68th.

Each of the three goals came about as a result of defence errors; this from a team that produced the highest defence rate in the league so far. It wasn’t all bad for City fans as they threatened potential comeback with Bernardo Silva scoring in the 84th minute and Ilkay Gundogan in stoppage time. Had there been enough time, Manchester City might just have levelled the game. Liverpool managed to hold onto their lead though end City’s undefeated run.

Going into the game, City has won a total of 20 games and drawn 2. They were looking so strong that people started believing they had the ability to emulate Arsenal’s amazing feat of 2003-2004 when the “Invincibles” conquered the league. To be fair, Liverpool was always going to be Man City’s toughest opponents. This was clearly evident when the hosts drew first blood in the 9th minute.

The last time City won at Anfield was in 2003, which ended an 18-year drought at the grounds. The way Manchester City started the game, it was almost as if they could feel the power of history catching up on them. Liverpool hounded the visitors from the get go with Raheem Sterling taking the brunt of the force.

After Man City equalised, it felt as if Liverpool deserved to be ahead and it took almost an hour for the action to spark up again. When it did, the crowd were stunned with three madcap goals coming in the space of just nine minutes. City’s defence were unable to stem the tide and fell apart at the seams. Even with the brave 2-goal comeback, the damage had been done and everyone knew it.