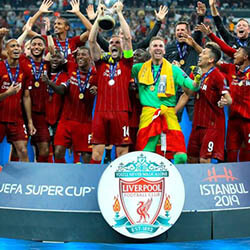 Liverpool has won the Super Cup for the fourth time in history after beating Chelsea 5-4 on penalties after a 2-2 draw in Istanbul. Goalkeeper Adrian managed to keep out Tammy Abraham’s spot kick to secure victory for the Champions League winners. Chelsea had taken the lead in the first half through Olivier Giroud’s strike but Sadio Mane scored twice in a row, giving the lead to Liverpool. A spot kick from Jorginho’s took the match into penalties, where Liverpool held their nerve throughout.

The victory comes two months after Jurgen Klopp claimed his very first trophy as Liverpool leader after he led the Reds to a 2-0 win against Tottenham during the Champions League final. Games between the two teams in Europe have been tight affairs in the past, with just one of their 10 previous meetings having been won by a margin of just a single goal. It proved to be the same story for the latest match as the two teams fought hard for 120 minutes in a game that did not finish until almost 1am in the morning in Istanbul.

By the end of the game, it come down to who could keep their focus in the oppressive heat and after nine excellent penalties, Abraham placed his shot too close to Adrian to hand Liverpool their first silverware of the season. Liverpool manager Jurgen Klopp told reporters that it had been a difficult game for both teams.