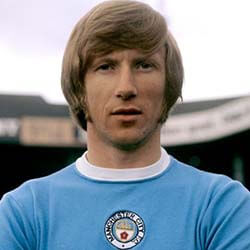 England mid-fielder great and Manchester City legend Colin Bell has died. He was 74, and died after a short illness.

Bell is considered one of Manchester City’s greatest players of all time – if not the greatest of all. His name will continue to live on in Etihad Stadium’s “Colin Bell Stand” which has been named after him. Man City Chairman Khaldoon Al Mubarak on Wednesday confirmed the news of Bell’s passing by way of a formal team press release, saying that the former player will forever be hailed one of the club’s greatest and most memorable members. Bell’s sudden passing will affect everyone connected to the club, added al Mubarak.

Once famously compared to a racehorse by coach Malcolm Allison owing to his exceptional and almost super-human stamina, Bell was a key driver of the club’s immense success in the 1960s and 70s. He throughout the course of his career playing for the club spanning 13 seasons, scored 152 goals. He also won 48 caps for England, netting a total of 9 times.

Bell was born in northeast England on February 26, 1946 and is a native of Hesleden. Following the passing of his mother at a very young age, Bell was raised by his father and remaining family. He first started his career playing for Bury in the greater Manchester area. He however soon attracted the attention of several of the bigger football clubs before accepting a position with City.

Colin Bell is survived by his wife Marie, and children Jon and Dawn.