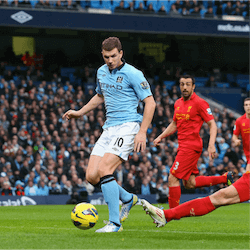 Premier League log leaders, Manchester City have kept up their winning ways, defeating Arsenal 3-1 and extending their record to 15 straight wins. This is a new club record in all competition formats for City, while the team is looking stronger and stronger each game. Kevin De Bruyne opened the scoring in the 19th minute while the remaining two goals came in the second half courtesy of Sergio Aguero and substitute Gabriel Jesus.

Man City’s goal tally is now sitting at 38 goals in just eleven league games. At one point, Arsenal were 2-0 down but managed to recover one goal thanks to the efforts of Alexandre Lacazette who popped the ball through the legs of keeper Ederson Moraes. Man City’s second half goals were fiercely protested as Nacho Monreal was given just the smallest of nudges which resulted in a penalty, and for the 3rd goal, it appeared that Jesus was offside.

In the end, Man City racked up another win, just four days after their 4-2 win over Napoli in the Champions League. The new-look Arsenal team that ran onto the pitch was an entirely different line-up from their midweek Europa League game. In some ways, this was a good move as they put heavy pressure on Man City’s defence, especially when Lacazette arrived on the field in the 56th minute.

Chelsea Pulls of Win against Untied

Meanwhile in London, Chelsea managed to break their six-game drought with a 1-0 win over Manchester United. Despite their loss, Man United head into the international break in second spot, eight points adrift of Manchester City. United were completely outplayed in their Chelsea clash. Coming back from a Roma thumping in the Champions League.

The only goal of the match was gifted to Chelsea by Manchester’s erratic defence, but was also a consequence of the foresight of Azpilicueta. In the 55th minute, Morata pulled away from defender Eric Baily and stood unmarked just 12 yards from the goalmouth. Seeing his opportunity, Azpilicueta fired a perfect cross, which Morata picked up with a powerful header straight into the back of the net.

With the loss of Romelu Lukaku to Manchester United, Morata came on board in the off-season. But while his counterpart has yet to score a goal in seven games, Morata’s goal drought is finally over.