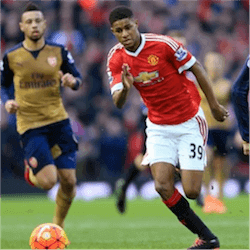 Thanks to the outstanding efforts of David De Geo and Jesse Lingard, the Red Devils defeated their arch rivals 3-1 at the Emirates. It was a game filled with excitement, tension and a few wayward challengers, but at the end of the day, the Arsenal/Man United match was a great vindication for Mourinho and his side. It also means that United are just five points off log leaders Manchester City in the English Premiership standings

Manchester United got off to a flying start when Paul Pogba played through Antonia Valencia who blasted a low shot past Petr Cech in the first quarter. Arsenal was still recovering from the shock when Man United struck again seven minutes later, this time through Jesse Lingard who was perfectly set up by Anthony Martial and Romelu Lukaku.

Things went from bad to worse for Arsenal who lost Shkodran Mustafi through injury to be replaced by Alex Iwobi. The home side never lost faith though and despite being two goals down, dominated for the remainder of the second half. The Gunners came close to pulling back one goal with a Mesut Ozil free kick which was just cleared by De Gea.

De Gea Holds Back The Tide

The final 10 minutes of the first half was a flurry of activity by the home side who camped out near United goals, waiting for their chance to strike. Despite huge efforts by Hector Bellerin and Kolasinac, David de Gea was more than up for the challenge, producing some brilliant saves and keeping the score at 2-0 at the break.

Arsenal finally got their first goal three minutes into the second half. Aaron Ramsey lined up Alexandre Lacazette for a perfectly executed shove past De Gea. With one in the bag, Arsenal came bounding back again and again. It fell to De Gea to hold off the tide as he denied both Lacazette and Alex Sanchez would-be goals from point-blank range.

In the 63rd minute, the tables were turned on the hosts. A swift counter attack by the Red Devils gave Lingard his second goal of the game after slicing in a Pogba cross. 10 minutes later United were reduced to 10 men as Pogba was send off for a studs-up challenge on Bellerin. The managed to hold on though and with a concerted defence effort, they closed out the match 3-1.