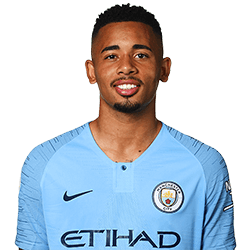 Gabriel Jesus of Manchester City scored twice as the team eased past the 10-man Wolves to remove Liverpool’s lead at the top of the pool down to four points.

The team did not managed to repeat the high scores that they earned during their 16 goal-record against Rotherham and Burton for their previous two games, but the latest outcome was expected as they dominated the field despite a modest winning margin.

Jesus grabbed the first goal within the first 10 minutes after Leroy Sane ran a brilliant pass by Aymeric Laporte, and allowed the Brazilian to take it home. In an already tough game for the Wolves, it was made that much more difficult when Willy Boly was dismissed just 19 minutes into the game after the French defender was handed a red card for a dangerous jumping challenge on Bernardo Silva.

Manchester City initially did not manage to take advantage of their extra player, and were given a brief shock when Jonny failed to turn in Diogo Jota’s cross as the Wolves made an attempt to move forward. But it was enough to spur City on, and they extended their lead a few moments later. Ryan Bennett saw Raheem Sterling stumbling in the box as Jesus took the reigns and added to his current tally of seven games in their last three matches, and saw his team take full control by the time half time came around. Not much changed after the break, with the Wolves ending on a bitter note.