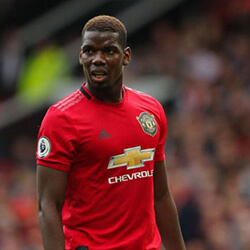 Manchester United says they are currently working to identify those who are accountable on social media for the racist abuse that has been aimed at midfielder Paul Pogba. 26-year-old Pogba saved a penalty during their latest 1-1 game with Wolves, but subsequently missed the shot. He is the third player in a week— after Reading’s Yakou Meite and Chelsea’s Tammy Abraham — to have racial abuse aimed at him on social media after missing a penalty. United said they were “shocked” by the violence and condemned it completely.

On Sunday, after saving his spot-kick, Reading striker Yakou Meite called out the racist messages he had received via social media. Meite, 23, went on as a replacement against Cardiff and received a penalty at 91 minutes. Last week, after his ultimate Super Cup miss against Liverpool, Chelsea condemned “abhorrent messages” directed at Tammy Abraham. Blues boss Frank Lambarde said he was not happy with the abuse that hit England’s 21-year-old forward and proposed that social media businesses should do more to prevent this type of hatred from being targeted at specific players.

Other supporters quickly criticized the tweets that consisted for violent and racist comments that had been sent to Pogba – who won the penalty before missing – not long after his full time stint with Molineux.  Some tweets were subsequently removed while several accounts seemed to have been banned. The terms and conditions of online social platform Twitter state that it “acts against behaviour that attacks people with hateful behaviour.”