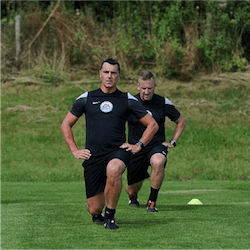 Something most online sports betting fans never consider, especially punters of the couch-potato persuasion, is the way different sports make different fitness demands: not only on the players, but on match officials too.

For example, cricket, tennis, football and rugby are all pretty similar from a player’s perspective: champions must train constantly to remain at peak levels of strength, fitness, stamina and skill.

But tennis or cricket umpires can afford to let themselves go a little (or even a lot; it’s a sedentary position, after all), whereas rugby and football referees, if they want to do their jobs properly, need to keep themselves almost as fit as the greatest players in the world.

This was a fact of life brought home in very concrete fashion to the pool of futsal referees vying for spots officiating at the 2018 UEFA Futsal Championship in Slovenia, which runs from January 30 to February 10.

In November, about 30 match officials with the potential to ref the tournament’s games were sent off to training camp, where they competed to make the final squad of 16 referees and two reserves who will take charge in the tournament.

For those unfamiliar with the sport, futsal is a version of football played on an indoor hard surface with smaller teams: indoor five-a-side, more or less. Played over a smaller area than outdoor football, futsal is correspondingly faster-paced, so if they are going to keep up with the action, refs need to be even fitter than their soccer counterparts.

The 30 referees in the original 2018 UEFA Futsal Championship pool travelled to the Slovenian capital, Ljubljana, for the training camp. They spent three days having to pass fitness assessments, as well as receiving skills updates on practical and theoretical application of the game rules.

By getting all the potential refs at the same training sessions at the same time, organisers hope they’ll all be on the same page of the rulebook, so to speak. The object is to ensure comprehensive knowledge of the rules of futsal in general and the competition in particular, as well as their consistent application during the championship.

And, of course, another object was to ensure that the 18 refs selected will have enough puff to keep up with the players when the tournament starts…