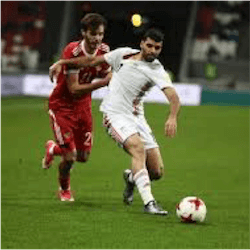 With the Soccer World Cup drawing ever closer, hosts, Russia have been in the spotlight with serious concerns about their ability to challenge the top-seeded sides. On Tuesday, a one-all draw against Iran did little to dispel the doubts for team. With the team being exempt from having to qualify for the tournament, as all host nations do, the Russian side has had to rely on a series of friendlies to test out their metal.

This past weekend, Russia beat South Korea 4-2, however their friendly with Iran proved a more realistic challenge. If it weren’t for Zenit St Petersburg striker, Dmitry Poloz slotting in an equaliser in the 57th minute, the Russians would have been looking at a solid defeat. This was the fourth draw for the Russian side in 14 matches since coach Stanislav Cherchesov took over the reins in August last year.

Speaking to the press, Cherchesov said that his team looked a lot better in the second half. He was concerned however about conceding a goal on the counter attack, but the team picked themselves up well, levelling the score and creating more opportunities. Cherchesov feels they need to analyse their performance in both the South Korea match and the Iran match to find out how to proceed.

Concerns for the Hosts

In the first half, it was Iran that looked to be the team with the more creative spirit. Having already qualified for the World Cup, the Iranians impressed on the field and kept the 32 000 odd spectators at the Kazan Arena on the edge of their seats. The first real chance for Iran came in the 21st minute when a free kick from Alireza Jahanbakhsh’s skimmed just over the top of the goals. Five minutes later, Azmoun had the chance to give the visitors the lead with a close-range header. Russian keeper Andri Lunev was on hand with a brilliant save, keeping the game scoreless.

As for the Russian team, they really only had once chance before the break. This was when midfielder Alexander Erokhin blasted a rebound kick just wide of the posts after Konstantin Rausch missed his target with a free kick. The Iranians broke the deadlock in the 57th minute when Azmoun received a brilliant cross from Mehdi Taremi and fired the ball past Lunev.

The hosts hit back less than 20 minutes later when Poloz picked up an Alexander Samedov cross to level the game. It was only after they equalised that the Russians begun to apply serious pressure. They created plenty of opportunities but their finishing let them down.