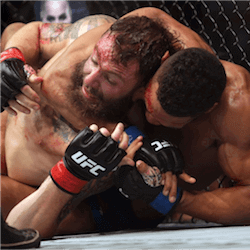 This past Sunday saw the conclusion of UFC Fight Night 112. There were many anticipated fights that concluded the weekend but the main draw was of course the lightweight fight between Michael Chiesa and Kevin Lee.

The hype started building around this fight after the two fighters got into a scuffle at the Summer Kickoff press conference in May. Ever since that day fans have been clamouring to see the two hot headed fighters meet in the octagon.

Both fighters had a winning streak before they met yesterday so anticipation was justifiably high. Unfortunately the bout ended shrouded in much controversy.

Lee had Chiesa in a rear choke at the end of the round and referee Mario Yamasaki misconstrued a hand gesture by Chiesa as a tap. The crowd was not happy and neither was Chiesa although he did not contest the ruling, instead saying he will see Lee at a rematch scheduled for December.

Many critics have said that Lee was dominating the match and Chiesa may have realised this and decided not to contest the decision until he has prepared himself better.

The second highlight of the night was Dominick Reyes beating Joachim Christensen with an incredible TKO just 29 seconds into the first round. This was Reyes’ debut at UFC and what a debut it was. He has a 7-0 undefeated history in professional MMA while Christensen is a 14-6 MMA veteran.

Amazingly this was Reyes’ fourth first round stoppage in a row, making out this 27 year old fighter as a very scary prospect for the future of the light heavyweight division.

Christensen has had a strong MMA career so far but his UFC record so far has been less than promising. This fight will be his second straight loss within the organisation, bringing his record at the UFC to a less than spectacular 1 for 3.

The rest of the Evening

The final match of the preliminary fights was Darrell Horcher meeting Devin Powell and taking the victory via split decision.