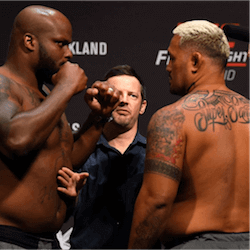 Must Win For Holm At UFC Fight Night 111

The Singapore Indoor Stadium in Kaliang will be the host venue of UFC Fight Night 111: Holm vs Correia.  As the name suggests the headline bout will be between the two bantamweights, Holly Holm and Bethe Correia. Holly is the former UFC bantamweight champion who will be defending against Correia, a former champion.

Holm has received a lot of flak and pressure after a 3 fight losing streak heading into this UFC main event. This has not been missed by Correia who has openly blasted Holm , saying that she is an overrated fighter and has not lived up to the title of champion. Those who think Holm has what it takes can place their bets on the fight at CrownBet.

Holm won the title off of the much celebrated Ronda Rousey which in itself was quite a surprising and controversial win.

Correia has gone on to say that Holm is risking her career by competing in weight classes she cannot hold her own in.

Holm has a 10-3 fight record but she made headlines after her loss to Germaine de Randamie for the Featherweight title that was to be awarded for the first time ever to the winner of the fight. UFC Fight Night 111 will be Holm’s return to the Bantamweight class.

Much To Prove This Coming Weekend

With Holm at the end of a 3 fight losing streak and Correia fired up and confidently that she will take apart the former champion, this event looks set to be one for the history books. It will set the tone for the rest of Holm’s career while it just may slingshot Correia back to the top.

UFC 111 will feature more exciting matches on the night. Rumours abound that another promotional fight was scheduled to be between Alex Caceres and Wang Guan, but that rumoured bout eventually materialised into Caceres VS Rolando Gabriel Dy.

Li Jingliang unexpectedly pulled out of his scheduled match with Jonathan Meunier thanks to an injury. He will be replaced by newcomer, Frank Camacho.

The Main Card fights include Andrei Arlovski vs Marcin Tybura in the Heavyweight class, Dong Hyun Kim vs Colby Covington in the men’s welterweight class and Tarec Saffiedine vs Rafael dos Anjos.