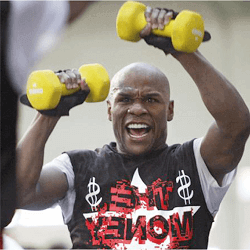 The hype machines rolls on as this week it was announced that the Mayweather and McGregor camps will be embarking on a worldwide media tour.

The two teams will kick off the promotional tour in Wembley Stadium with arrangements made for 10 000 people to show up. Entry to the press events will be free and many fans are expected to arrive and witness the two athletes meet in public for the first time in months.

The two fighters have already come to virtual blows in their on going social media war. Recently Mayweather has revealed on Twitter and Instagram his unorthodox training techniques. These techniques have been employed to take advantage of ever-possible edge he can in the lead up to this historic fight.

The 40 year old boxer who has come out of retirement to face the MMA fighter has started employing Cryotherapy after training in order to recover faster. The fighter seems to be struggling to recover from his intensive training regime and Cryotherapy is said to assist the body’s natural recovery process by cooling down the core body temperature.

Additionally Mayweather has also posted pictures of him engaging in Bikram Yoga, also known as hot yoga, a controversial form of the exercise that is done in Sauna like conditions to improve strength and flexibility. McGregor has commented that recent video’s of Mayweather in training makes it look like the fighter is moving through quicksand.

Mayweather With The Advantage

Despite the social media back and forth, most experts favour Mayweather. The fighter’s ridiculous 49-0 record pretty much speaks for itself. The fight will follow traditional boxing rules.

This means that there will be 12 3 minute rounds and the fighters will be wearing traditional 10 ounce gloves that are much heavier than the MMA gloves that McGregor will be used to.

McGregor may have a reach and age advantage but they won’t mean much with the expert defence and experience that Mayweather will be bringing to the ring.

Bookmakers are heavily favouring Mayweather in the odds. He currently holds around 1/8 odds to win, with McGregor getting a 9/2.  Most bookmakers give Mayweather 8/11 odds for finishing the match with either a knockout, TKO or disqualification decision. McGregor is given a 6/1 on the same outcomes. Sportsbet is offering a wide selection of markets for this fight, and you can get your wagers in online well in advance.

Many fans take the jaded approach that the fight is only happening for the money. Mayweather stands to pocket a tidy $230 million and McGregor could pocket around $70 million, more than the fighter would ever make on a single UFC fight. Either way it is still a once in a lifetime match that may open the door to more mixed discipline fights in the future.