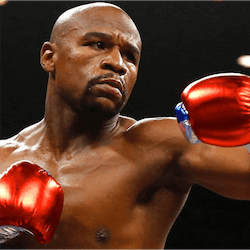 Easily one of the most hyped fights of the year will be the mixed discipline meeting of Floyd Mayweather Jr and Conor McGregor. These two fighters are scheduled to face off against each other on the 26th of August in what has been billed as “The Money Fight “ and “The 180 Million Dollar Dance”.

Even though McGregor made his name in MMA, this match will be a full on, traditional boxing match. Of course the debate rages over whether McGregor will have the skills to defeat a professional boxer when he is unable to make use of his MMA techniques. McGregor is however known for his signature match ender, a devastating left hand punch.

Adding further fuel to the fire was a leaked video released online by a former sparring partner of McGregor, Chris Van Heerden. In the video McGregor clearly struggles to defend or attack against his sparring partner.

Many feel this video casts doubts on whether McGregor will have the fundamentals to stand a chance against Mayweather in the ring. The video was shot in 2016 in it, the former IBO Welter weight champ Van Heerden easily lands blows on McGregor.

When van Heerden posted the video to his twitter account he accompanied the clip with a statement that if he can land blows on McGregor then Mayweather will have no problem.

Mayweather’s camp however is not as impressed as many commentators online. They have openly stated that they doubt the legitimacy of the video. They suspect the video may have been posted in order to lull them into a false sense of security.

Mayweather is coming out of 2 years of retirement to face Connor McGregor. With a so far unblemished and unmatched 49 – 0 record, Mayweather stands to lose a lot more than a fight.

McGregor on the other hand will make one of his biggest paydays ever in the match with many fans believing that this may be McGregor’s last ever fight. McGregor has fought 21 professional MMA matches with only 3 losses. 18 of those fights have ended with a McGregor knockout, compared to Mayweather’s 26 KO’s from 49 matches.

In preparation for the fight, McGregor has posted various pictures to social media of his training area that features a massive floor to ceiling mural of the Irishman landing his trademark left hook on the former champions’ undefended jaw.