Mayweather vs McGregor US Tour 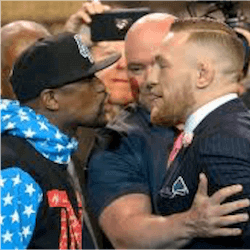 McGregor’s Not So Subtle Message to Mayweather

The first event of the American leg of the Floyd Mayweather Jr vs. Conor McGregor media tour concluded in the early hours of the 12th and it was definitely worth it. The two stars created quite a spectacle that is sure to have hyped up even the most jaded fight fan.

The two stars trash talked and stared each other down, but best of all was how they contrasted against each other. The two fighters have very little in common and it is this juxtaposition of two different worlds that has probably generated the most interest in people.

The event took place in the Staples Centre in Los Angles. Once the event kicked off it dominated social media with press and fans providing constant updates to what was happening. During the traditional stare down for press photos you could clearly see that there is a lot of tension building between the two fighters.

It was also the first time for many seeing the two fighters actually standing toe to toe. The most glaring thing you notice is the size advantage that McGregor has over Mayweather. It could easily be the biggest fighter Mayweather has faced in his career.

McGregor spoke first and many people expected him to offer the loudest voice and most trash talking but instead it was Mayweather who delivered the one-liners, eloquently and consistently rebuffing the insults slung his way by McGregor.

Earlier this month Mayweather shared on social media that he is under investigation by the IRS for back taxes and McGregor also brought this up as soon as possible. Mayweather simply showed the crowd a cheque for $100 million and told McGregor that he is the taxman and that he is going to tax McGregor’s a**. The crowd responded accordingly.

But in the end, it was McGregor’s suit that really did the talking. Mayweather may have been slick with the verbal sparring, but when it came to dressing for success, McGregor was streets ahead. The two fighters couldn’t have dressed more differently, but the Irishman’s stylish suit spoke volumes when you gave it a closer look. Instead of pinstripes, McGregor’s suit was covered in tiny letters, all spelling out F**k You. Clearly he was content to let his suit do the trash talking and make a statement in a really unusal way. It looks like that in this case, it’s round 1 to McGregor.

McGregor predicted that he will win the fight in a 4th round knockout, but Mayweather was unfazed. He simply bided his time and retorted when it was his turn on the microphone. McGregor gave one final insult commenting on the fact that Mayweather showed up in a star spangled tracksuit and that he himself was wearing a tailored suit.

It has to be said that McGregor did seem a bit out of his element. He was not the showman people expected but by no means did he come off as weak or intimidated. Hype continues to build for the event and this press conference has been a great showcase for one of the biggest fights of the century. We’ll have to wait now to see what happens when the suit comes off and the gloves go on.